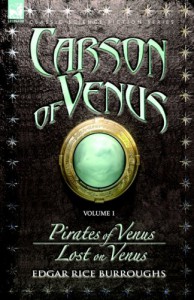 Pirates of Venus: Carson Napier, scientist and adventurer, lands on Venus after a rocket-powered voyage to Mars takes a hugely wrong turn. It turns out that Venus is a jungle world shrouded in clouds. Carson meets the Vepajans, and Duare, daughter of the jong (ruler), whom he immediately falls in love with in typical Burroughsian fashion. From there, we have giant spiders, bird men, piracy, and a series of misfortunes leading into the second book, Lost on Venus.

I like Burroughs's stories but I'm of the opinion that he tries to explain too much. I don't really care about the method Vepajan's calculate their world's circumference or how their T-Ray guns work. Other than that, I'm enjoying the story. Though capable, Carson Napier isn't the demigod John Carter is.

Lastly, I really enjoyed the references to Pellucidar, Tarzan, and David Innes on the first page. It's a shame Burroughs didn't write a crossover novel featuring all of his heroes.

Lost on Venus: Lost on Venus picks up where Pirates of Venus left off. Carson is captured and subjected to the horrors of the Room with Seven Doors. After that, he and Duare are captured by Skor, jong of a land of undead. He escapes, but with a different girl, Nalte. Carson and Nalte end up at Havatoo, a city where the laws of eugenics govern everything across the river from the city of the dead. Carson builds an airplane and eventually escapes Havatoo with Duare.

Lost on Venus was probably a little better than Pirates of Venus but that was probably because Burroughs already over-explained everything in the first story. It moved quickly and I liked the double cities of Havatoo and Kormor.

The Final Verdict: While I found these entertaining, I didn't enjoy them as much as I did the first three Mars books. It felt like John Carter of Mars with a change of scenery.
Tweet