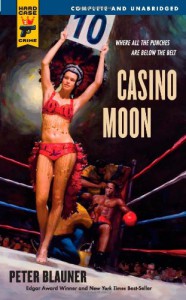 Anthony Russo is the stepson of an Atlantic City mobster who desperately wants to get away from the family business despite his stepfather's wishes. To get out, he borrows a lot of money from a loanshark and backs an aging boxer's comeback. Meanwhile, the feds are getting close to the family's operation, led by a local cop affectionately called Pigfucker. Anthony soon learns that the lady wrestler he's begun having an affair with isn't half as sleazy as the world of professional boxing...

I really wanted to dislike this book when I got it in the mail as part of the Hard Case Crime book club. It's got a few strikes against it already. It's bigger than most Hard Cases by fifty pages. The cover is good but not great. It's from a weird time period. Most Hard Cases are pre-1977 or originals just for the club. This one's from 1994. And it isn't written by Lawrence Block or Donald Westlake.

So why do I like it? It's a good story, that's why. Anthony's trapped in a life he can't stand and is feeling desperate. It's not so hard to see why he makes the choices he makes, even though they're the wrong ones. The battle between family loyalty and going legit weighs on him through the whole story. The violence, when it happens, is on the gruesome side and not pretty at all, especially the boxing match at the end. The line "Something's wrong. I can move my jaw with my tongue." immediately comes to mind.

I recommend this to all Hard Case fans, as well as fans of mobster stories and the Sopranos. Michael Imperioli would make a great Anthony Russo.
Tweet