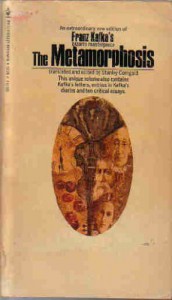 Gregor Samsa wakes up one morning to discover he's been transformed into a giant beetle-like creature. Can he and his family adjust to his new form?

Translated from German, The Metamorphosis is the story of how Gregor Samsa's transformation tears his family apart. I feel like there are hidden meanings that are just beyond my grasp. I suspect it's a commentary about how capitalism devours its workers when they're unable to work or possibly about how the people who deviate from the norm are isolated. However, I mostly notice how Samsa's a big frickin' beetle and his family pretends he doesn't exist.

There's some absurdist humor at the beginning. Samsa's first thoughts upon finding out he's a beetle is how he's going to miss work. Now, I'm as dedicated to my job as most people but if I woke up to find myself a giant beetle, I don't think I'd have to mull over the decision to take a personal day or two.

Aside from that, the main thing that sticks out is what a bunch of bastards Samsa's family is. He's been supporting all of them for years in his soul-crushing traveling salesman job and now they're pissed that they have to carry the workload. Poor things. It's not like Gregor's sitting on the couch drinking beer while they're working. He's a giant damn beetle! Cut him some slack.

All kidding aside, the ending is pretty sad. I'll bet Mr. Samsa felt like a prick later. The Metamorphosis gets four stars, primarily for being so strange and also because it's the ancestor of many weird or bizarro tales that came afterwords. It's definitely worth an hour or two of your time.
Tweet