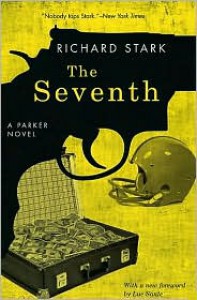 Parker and six other rob a football stadium for a pretty impressive haul, entrusting Parker with the take. Days later, Parker leaves his apartment to get beer and cigarettes and returns to find his girl murdered and the money missing. Can Parker get back the money before the cops get him?

Over the past seven books, I've found that the best stories are the ones that stray from the usual Parker formula. This one is no exception. Instead of pulling off a heist, Parker is primarily occupied with figuring out who took his money and killed his girl. Keeping his team together is somewhere after those two goals. While you knew Parker was going to get at least some of his money back, the mystery man angle spiced things up, especially when other members of Parker's team started dying and/or turning on him.

Another solid effort from Richard Stark and another great book for noir fans.
Tweet