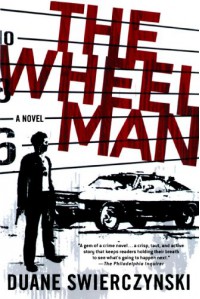 Mute getaway driver Patrick Lennon thought it was a routine bank job until the black van rammed them and everything went to hell. Amidst a maze of murder and double crosses, can Lennon recover the $650,000?

Wow. I'd been aware of this book for a couple years before I finally picked it up and now I'm kicking myself for waiting so long.

The Wheelman has more twists and double crosses packed within its slim 250-ish pages than any four other crime books on the racks. More twists than a snake trapped on a Moebius strip, in fact. From Lennon to the other heisters to Katie to everyone in between, nothing is as it seems. Swierczynski hits the ground running and never comes up for air. The violence is quick and frequent but not overly graphic. Just when you think you know what's going on, someone double crosses someone else and you're as in the dark as Lennon. It's just begging to be turned into a movie starring Jason Statham.

Since Richard Stark's Parker first hit the scene with The Hunter, many homages and imitators have sprung up. While The Wheelman is clearly inspired to some degree by Parker, it surpasses its lesser siblings and joins luminaries like Dan Simmons' Joe Kurtz novels. It is not to be missed by crime fans.
Tweet