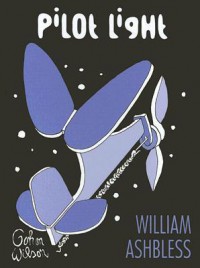 Where do I start?

Pilot Light is purported to be a story by William Ashbless, the fictitious poet invented by James Blaylock and Tim Powers. As near as I can tell, it's the story about a pilot that's been rebuilt by aliens. From what I gather, it's more the story of the manuscript left behind by Ashbless and cleaned up by Powers and Blaylock. The forward, afterward, and footnotes tell a much more coherent story than the actual text. Sturgeon? Onion? I have no idea what was actually going on with the main text.

On the plus side, the footnotes by Ashbless were hilarious and the Gahan Wilson art was top notch, especially of the Sturgeon.

I feel like I should have more to say but the book's only 68 small pages long. I'd hate to have paid 20 bucks for it. If you're a Powers and Blaylock fan who appreciates post-modern lit, this would be one to pick up. Other than that, you're on your own.
Tweet