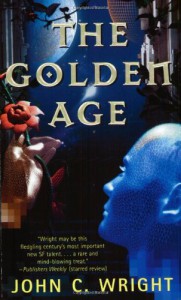 While at a masquerade leading up to the celebration commemorating the High Transcendence, Phaethon finds certain people are shunning him and that a large segment of his memory has been erased. Phaethon slowly pieces together why his memory has been erased and learns that if he regains his memory, he will be exiled from Oecumene and the paradise it provides. But what does that have to do with his father, Helion, and the other six Peers?

The Golden Age is one mind-bender of a read. While wrapped in space opera trappings, it's essentially a mystery. Phaethon's tale reminds me of Michael Moorcock's Dancers at the End of Time at some points, William Gibsons's Neuromancer at others, with a heaping helping of Roger Zelazny throughout. John C. Wright shook the idea tree hard when he crafted this tale, leaving only the diseased and worm-ridden ideas for the rest of us. The only book I've read recently that crammed so many ideas between its covers was Kraken by China Mieville.

Phaethon's progress in uncovering why his memory was erased was quite a read, full of red herrings. His relationship with his father Helion and wife Daphne were well done. The technology Wright invented, while extremely daunting at first, was well conceived and seemed plausible in an sf context. Phaethon was a compelling protagonist and will doubtlessly continue to be so in the next too books. The writing style was actually pretty breezy once you wrapped your head around some of the concepts.

Any complaints? Well, while I loved learning about Phaethon's world, not a whole lot happened in this book. Much like Gene Wolfe's Book of the New Sun, Wright throws the reader into the deep end of the pool without much in the way of exposition. Still, it was quite an enjoyable read and I'm eager to devour the other two books in the series.
Tweet