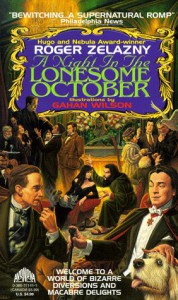 A Night in the Lonesome October is about a gateway to a dimension of Lovecraftian horrors and the two opposing forces dedicated to opening the gate or making sure it stays closed. The story is told from the point of view of Jack the Ripper's dog Snuff. Yeah, you read that right.

I was hooked right away, around the time Snuff and the graveyard dog had a funny conversation and asked to see one another's teeth. One of the characters calls The Game, as it is known, a lunatic scavenger hunt. That's pretty much what it is. Snuff spends most of the book calculating where the gateway will appear, having to recalculate every time a player turns up dead...

One of the best parts of A Night in the Lonsesome October is trying to figure out which characters are actually participants in The Game, and which side they are on.

I enjoyed seeing classic horror characters like Count Dracula, Larry Talbot, and Frankenstein's monster in the same story as Sherlock Holmes and Jack the Ripper. Through in the Cthulhu mythos and you have a ripping good yarn.
Tweet