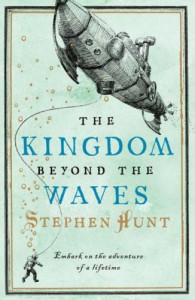 Professor Amelia Harsh joins an expedition, funded by Abraham Quest, to find the fabled city of Camlantis. Joining her are Commodore Black and his U-boat, a blind sonar man named Billy Snow, a crazy steamman named Ironflanks, and assorted dregs of society. Meanwhile, Cornelius Fortune, aka Furnace-breath Nick, a demon masked vigilante, stumbles upon what Abraham Quest is really planning...

Two words come to mind when I think about The Kingdom Beyond the Waves: "F@cking" and "Great." All of my problems with the Court of the Air were remedied in this, the next book in the series. The stories are clearer and the characters more interesting and likeable. While some of the characters made appearances in the Court of the Air, I wouldn't think it would be essential to read that one first.

Amelia Harsh is like a musclebound female Indiana Jones/Doc Savage, archaeologist and explorer extrordinaire. The story reads like a Doc Savage tale written by Jules Verne. Hunt's world is a very original place, free of many fantasy cliches.

I recommend this to all steampunk fans and those of pulp adventure tales.