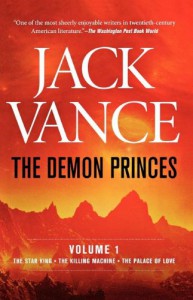 The Star King: Kirth Gersen, last remaining survivor of the Mount Pleasant massacre, begins his quest for vengeance against the five Demon Princes. His first target, a Star King called Malagate the Woe. But which of the three suspects is Malagate?

The Star King is a space opera tale but felt like a western at times and a James Bond story at others. Gersen is a ultra-capable protagonist. I'm hoping the other Demon Princes give him more trouble.

I have two gripes with this book so far. One, this edition is riddled with typos. Two, the pace is really slow. You'd think a 145 page revenge story would move at a much faster speed.

The Killing Machine: Gersen targets the next name on his list, an immortal shapeshifter named Kokor Hekkus. Gersen's vengeance trail sees him aid in constructing a killing machine and get locked up in the Interchange. Can Gersen escape and take Kokor Hekkus down?

I have to admit I wasn't sold on the setting or the characters in the first volume. I'm still not thrilled but I enjoyed The Killing Machine a lot more than The Star King. The concepts of world Vance is building in this series are growing on me. I particularly liked The Interchange, sort of an escrow service for kidnappers and their victims. Gersen dealt death in a much more impressive fashion than in the Star King. It was still a little on the slow side but now I'm ready for the third story in this omnibus.

The Palace of Love: Viole Falushe is the next name on Gersen's list and the proprietor of an planet-wide brothel. But what does Viole Falushe have to do with Vogel Filschner and the girls he kidnapped years ago?

Boy, did this one drag. I thought the Star King moved slowly but this one took the taco. While I like Kirth Gersen's adventure's and the worlds he visits, the pacing is what keeps me from being gung-ho about reading the next two books. Jack Vance makes reading a 150 page revenge tale as exciting as reading the dictionary. Still, it wasn't all bad. Vance's dialogue is as clever as usual.

In conclusion, I thought the first three books of the Demon Princes series to be on the okay side of being good but I'm in no hurry to tackle the second omnibus. It's not bad but it's no Dying Earth. I actually liked the story better when Hayford Peirce wrote it as an homage to Vance and it was called Dinosaur Park
Tweet