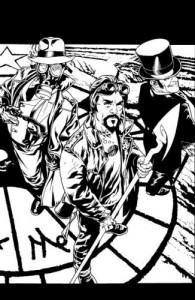 As I've said before, the best comics have an underlying theme. Starman has always been about family, with Jack trying to fill the shoes of both his father and dead brother

This, the second Omnibus, contains Starman 17-29, Showcase '95 12, Showcase '96 4-5, and Starman Annual one. It also contains two of my favorite stories in the whole series, namely the intro of Bobo Benetti, a super-powered bankrobber from the 40's who inadvertantly becomes a hero, and the one where Jack teams with Wesley Dodds, the Sandman of the Golden Age. Wesley Dodds handng Jack his gasmask before he goes into battle is probably my favorite sequence in the entire series.

James Robinson's writing is top notch, as is Tony Harris's art. Robinson respects the past without being handcuffed by it. Re-reading this omnibus reminds me why I regard Starman so highly. It was head and shoulders about 99% of the comics at the time and still is.