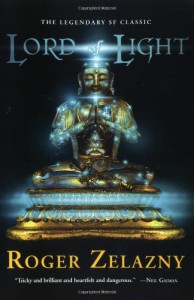 I don't even know where to start on this one. Roger Zelazny solidified his position on my favorite authors list with Lord of Light. It's the best writing of his that I've come across so far.

The Plot: Long story short, immortals from Earth set up shop on another world and assumed the guise of Hindu gods. Sam, aka Buddha, Siddhartha, Kalkin, etc., opposes them in each of his lifetimes, reviving Buddhism as a tool in his quest. The final confrontation doesn't disappoint.

As other reviewers have said, the story is mostly one flashback between two bookend chapters. It took a little getting used to. The characters of the "gods" were interesting. I'd read more books about Lord Agni and the rest. I also liked the pray-o-mat machines and the Accelerationists, those who wanted to give humanity advanced technology to speed their spiritual developement.

All in all, it's sci fi in a fantasy wrapper telling a version of the rise of Buddhism from Hinduism. It's one of the best books I read in 2009.
Tweet