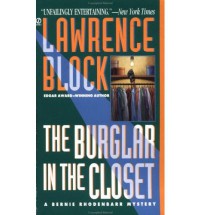 Bernie Rhodenbarr's dentist hires him to steal his ex-wife's jewels. The problem is she inconveniently gets murdered while Bernie is hiding in her closet. Before you know it, the police are after Bernie for not one but two murders. Can Bernie clear his name before the police catch him?

I have to admit that after the first Burglar book, I was a little skeptical. Block changed my mind with this one. While the plot is quite similar to the first book, Burglars Can't Be Choosers, it's better executed. The writing is better, the plot is better, and the characters are better. Not only that, the exposition is kept to a minimum since we already know about Bernie and his night life. I had no earthly idea who the killer was until about 81% of the way through the book. There were some nagging plot threads that were never resolved but all in all, it was an enjoyable read.
Tweet