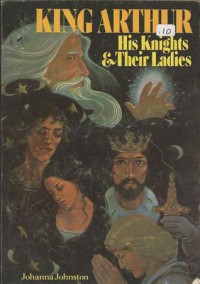 This was the first King Arthur book I ever read at the tender age of eight, bought at a yard sale for a dime. I recently tracked it down after finding out my mom donated it to a school along with a pile of my other childhood favorites.

King Arthur: His Knights and Their Ladies is a distilled version of the King Arthur stories everyone knows. For me, it was a gateway into other Arthurian stuff and fantasy in general.

As I said, it's distilled. Arthur's origin is simplified, the Knights of the Round Table are formed, and the notable knights each get a chapter or two depicting one of their notable quests, complete with knights being bested and maidens being saved, right up until the final battle between Mordred and Arthur. Great stuff for an eight year old. For a 33 year old it's not a bad refresher.
Tweet