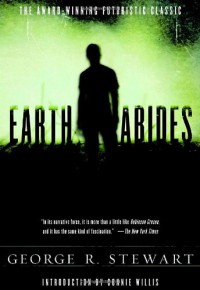 Men go and come but the earth abides.

I picked up Earth Abides because it was one of the inspirations for Stephen King's The Stand and because I've been in a post-apocalyptic mood lately. Earth Abides didn't disappoint.

It grabs you from the start. Isherwood Williams (Ish), gets bitten on the hand by a rattlesnake just after discovering an old hammer in the desert. After days of suffering from the rattler's bite, Ish wakes up and no one else is around. The beginning reminded me a little of Day of the Triffids but since this one was written first I couldn't complain.

At least a third of the world's population was wiped out by a plague. Ish theorizes that the venom in his veins protected him but we never find out why he survived. The rest of the book consists of Ish travelling across the country and eventually founding a tribe and leading them in the struggle for survival, all the while wondering if his tribe will repeat the mistakes of the past.