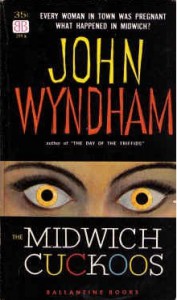 Ah, my other favorite John Wyndham classic and another prime example of the blurred lines between sf and horror in the first half of the 20th century.

You all are familiar with the concept even if you don't know where it comes from. Creepy kids are born in an isolated England town to unsuspecting mothers and proceed to terrorize it with their hivemind and telepathic abilities. Classic stuff and pillaged innumerable time in both print and film. How do you defeat enemies who know your every thought?
Tweet