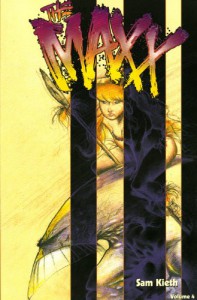 Ten years after the conclusion of Julie Winters's saga, Sara struggles with her relationship with her father, Artemis Pender, aka Mr. Gone. Dave, the former Maxx, is a plumber, while Sara's Maxx is a homeless guy named Norbert. Julie Winters is missing and there's a giant banana slug named Iago looking for her. Did I mention the past 20 issues might have been a dream and Mr. Gone might not be as much of a villain as we previouosly thought?

Volume 4 begins a voyage into Sara's (formerly Sarah) world and past, as well as the past of her father. Her roommate Steve thinks he's psychic. Her dad lives in a trailer park and runs a shelter for battered women.

By far the best part of this volume is the origin of Mr. Gone. Gone has a painful history of abuse which almost makes him a sympathetic character. Some poignant writing, especially for a comic book where one of the main characters is a humanoid horse in a makeshift super hero costume with a patchwork quilt for a cape.
Tweet