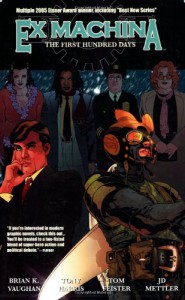 Mitchell Hundred, formerly the super hero known as The Great Machine, gets elected mayor of New York. From there, he deals with a blizzard, a controversial painting, a sleazeball trying to blackmail him, and a killer killing snowplow drivers.

I can't BELIEVE I didn't pick this up before now! BKV and Tony Harris make a good team. I really liked how the story shifted back and forth from Hundred's mayoral term to his former super hero career. The supporting cast was very well developed. The fact that the Great Machine doesn't wear the standard super hero spandex is also a plus. Hundred's super power, the ability to talk to and control machines, is well done and fairly original.

I highly recommend this to fans of Starman and Y The Last Man and I can't wait to pick up the next volume.
Tweet