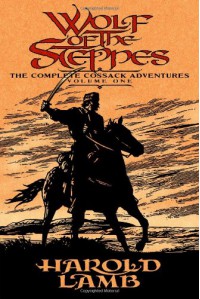 Thoughts from the halfway mark:
Harold Lamb really knows how to tell a good adventure yarn. Not only that, his stories are very well researched, a rarity among pulp stories. The stories in this volume range from twenty to eighty pages, good for an evening's read. The writing is detailed but not as weighty as that of Robert E. Howard. Lamb was one of Howard's influences, which was the reason I picked this up in the first place.

Khlit, the main character, is an aging Cossack who leaves his band and goes wandering. The stories are so far are fairly fast-paced. Khlit uses his wits to defeat his enemies more often than his curved saber. In the ones I've read so far, he's gone up against Tatar hordes to rescue his foster son's wife to be, infiltrated a fortress of assassins, found the lost tomb of Genghis Khan, joined the Tatars, and withstood the seige of Shiangking. Great stuff.

Later:
The later stories failed to disappoint. Prester John, bandits in the Gobi, a Mogul Queen, solid adventure stories one and all. I'm officially recommending this book to all pulp fans.