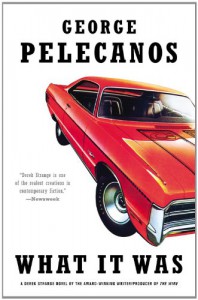 When Derek Strange is hired to find a missing ring, he has no idea what he's getting into. Robert Jones, aka Red Fury, is on a crime spree, looking to make a name for himself, and Frank Vaughn is on the case. Will Strange find the ring he's looking for? Can Frank Vaughn prove he isn't too old and bring Red Fury in?

And now, I can add "Read the complete novels of George Pelecanos in 2013" to my resume.

As with all George Pelecanos books, What it Was paints a vivid picture of what life in Washington DC was like, this time in the mid-1970's. Derek Strange is fresh off the police force and looking to make a name for himself as a private investigator. Frank Vaughn, his former partner, is still on the force despite nearing retirement. And Red Fury doesn't care whose toes he steps on.

The McGuffin of the story, the ring Strange is hired to find, is an afterthought for most of the book, though it changes hands quite a few times. The real story is of Strange, Vaughn, and Fury, all with something to prove.

The writing is vintage Pelecanos, full of car and music references and painting a picture of DC life. While I knew Strange wouldn't die, since he was telling the story, there were some tense moments, plus some cameo appearances, like Nick Stefanos and Johnny McGiness working at Nutty Nathan's in the 1970's.

The suspense builds throughout as Strange and Vaughn get closer and closer to crossing paths with Red Fury. When the big moment happened, it didn't go down quite like I suspected but it was still pretty satisfying. Write more Derek Strange, Pelecanos!

What it Was is an easy four stars. If you haven't read a George Pelecanos book yet, you're really missing out.