Doctor Who: The Death Pit 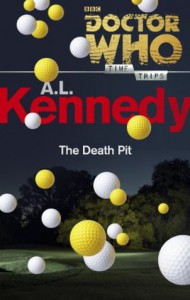 When guests at a golf course start disappearing, Receptionist Bryony Mailer starts investigating. Fortunately for her, she is aided by a scarf-wearing man who thinks he should be in Chicago. Can he put a stop to whatever is happening to the guests? Of course, he can. He's The Doctor... Cue the Fourth Doctor version of the theme music!

This was a Netgalley find.

This somewhat goofy little tale reads like a lost episode from the Tom Baker era of Doctor Who. There's not a whole lot I can reveal of the plot without ruining things. Suffice to say, be careful of the bunker on the 13th hole.

The writing is good, lending a lot of Adams-esque humor to this Fourth Doctor tale. The menace was menacing enough and the characterization of The Doctor was spot on. Bryony and Patterson were both surprisingly well developed for characters in a media tie-in short story.

That's about all I have to say. It was a fun 56 pages and makes me want to watch some old Doctor Who episodes.