The Library: The Complete Series 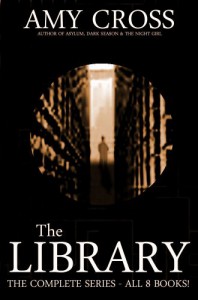 A college student named Claire is kidnapped and wakes up in another world, that of the world-spanning Library. As she looks for her way home, her only company is an aging soldier named Vanguard and Tom Sharpe, the man who kidnapped her. Can she find her way back home? And who are the mysterious Forbidders?

This showed up in my FreeBooksy email one morning. Since it started life as a series of Kindle serials and I've been contemplating doing a serial myself, I read it for equal parts research and entertainment value.

Thoughts from the halfway mark:
The world Amy Cross presents is a very compelling one. Imagine a Library the size of a planet with a bizarre ecosystem of magical creatures living within. Claire, the heroine, is in denial at first but gradually comes to accept her surroundings. Her companions Vanguard and Tom Sharpe prove to be much more complex than originally thought. The mythology of the world unfolds in easy to digest courses.

The whole thing has a Labyrinth vibe from the beginning and what's not to like about the Labyrinth? Muppets, David Bowie, Jennifer Connelly, it's practically the perfect 1980's fantasy movie. However, this story is darker and reminds me of The Neverending Story at times. And Michael Moorcock.

Still, it's not all Goblin Kings and M. C. Escher drawings. It's a little on the repetitive side but that's probably owing to it's episodic origins. Also, I'm not very keen on the present tense and both of the 1st person viewpoint characters use it. There was a bit of Claire's backstory that came out of extreme left field but I'm giving Amy Cross the rest of the book to vindicate herself for that. Other than those things, it's beans on toast.

At the finish line
The battle against the Forbidders and the incursion of the mysterious Darkness kept the story going at a pretty quick clip. The story took a lot of unexpected twists and turns, some of them I enjoyed, others I found questionable. I guessed Claire's final fate quite a while before it happened but there weren't a whole lot of other directions the story could go in. I was also a fan of Vanguard by the end of the tale even though I found him pretty uninteresting at the beginning of the tale. The conclusion reminded me of Stormbringer, the Dark Tower, and the Neverending Story. It was quite satisfying.

All in all, I'm glad for the time I spent reading The Library. It had its ups and downs but should appeal to fans of 1980's fantasy movies like the Labyrinth and the Neverending story, and books like Michael Moorcock's Elric series and also Neil Gaiman's work. 3.5 out of 5 stars.