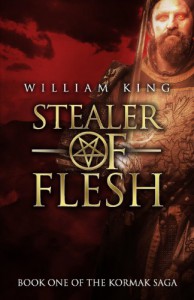 When an ancient amphora containing a demon is stolen, Kormak tracks the thieves down until one remains. Staggering out of a blizzard, Kormak finds himself at a fortified manor where both the last thief and the amphora are guests....

I knew William King from Gotrek & Felix: The First Omnibus so I was pretty excited when this popped up on my Freebooksy email one morning.

Basically, a body-stealing demon gets loosed upon the world and Kormak crosses an entire continent to slay it before it becomes immortal. The story is told in five smaller tales, all linked, much like some of the old Conan paperbacks this was inspired by.

King's prose is a cut above it's media fiction roots. Much like the Gotrek and Felix books, there's a good dose of humor interspersed with the gratuitous carnage.

Kormak is much deeper than the Conan ripoff I originally had him pegged for. He's a member of a religious order dedicated to fighting the forces of darkness and doesn't have a great love of wizards.

Still, if you're not a fan of the way the Sword and Sorcery subgenre of fantasy treats its women, you aren't going to find it to your liking. The female characters are largely interchangeable.

He's not going to unseat Joe Abercrombie or any other of fantasy's current juggernauts, William King delivers the goods in Stealer of Flesh. It bloody good fun. 3.5 out of 5 stars.