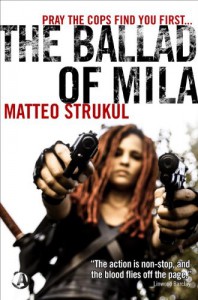 Two rival gangs fight for control of northern Italy's underworld and at the center of it all is a mysterious redhead named Mila. Will anyone be left standing when Mila is finished?

I got this from Netgalley and Exhibit A.

The Ballad of Mila reads like a combination of Fistful of Dollars and Kill Bill. The story is that of a wronged woman who trains for years, arranges for her mortal enemies to nearly annihilate one another, then swoops in to finish things up. Sound pretty good?

Mila is a deadly heroine from the Lisbeth Salander school of ass kicking. Not only is she a fearsome martial artist, she's also good with swords, knives, the Colt .45 and sniper rifles. That's what you get when you're raised by your WWII veteran grandfather after you see your father murdered, I guess.

The villains are suitably vile, though both are attached to their families. I almost felt sorry for them given how they had no chance against Mila. And therein lies the rub. Mila is such a bad ass that I was kind of bored. While the blood and gore was fun, Mila escaped almost without a scratch.

This book feels like more like a Hard Case title than an Exhibit A one. Hell, it feels more like a Hard Case more than most of the recent Hard Case releases as well. It's a fun pulpy action story. As long as you're not expecting the second coming of The Big Sleep, it should make for a few enjoyable hours of reading. 3 out of 5 stars.