Funny but very "been there, done that" 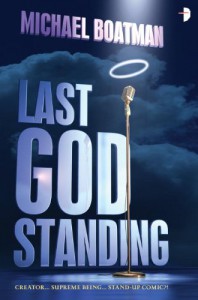 When God goes on sabbatical and becomes a human, the resulting power vacuum causes chaos among the obsolete gods, leading to a series of god killings. Meanwhile, God grows up to be Lando Cooper, an aspiring comedian who works for his father. Can Lando figure out who is making the power grab without forsaking his mortal life?

I got this from the fine folks at Angry Robot via Netgalley.

So it seems Michael Boatman of Arl$$ and Spin City fame is also a writer and a pretty funny one at that. Once I knew who Boatman was, I kept picturing him in the role of Lando Cooper. Before I get any further, how awesome is it that the main character's full name is Lando Calrissian Darnell Cooper?

Last God Standing is a humorous fantasy that also has some good ideas about gods and belief in it. Lando's a pretty relatable former deity, still living with his mother, still struggling to become what he wants to be. His relationship with his girlfriend is pretty believable, being afraid of meeting her parents since he's kind of a screw up and her father is due to be knighted. Lando's divorced parents were by far my favorite supporting cast members, though.

The conflict among the gods was well done and the scope of destruction when gods clash reminded me of some recent super hero movies. Speaking of super heroes, Lando's geek references were great and not overdone.

However, I liked the book but I didn't love it. Firstly, I thought Lando being mortal but still being able to access his Godly power, albeit with consequences, was a bit of a copout.

My other gripe was a matter of personal taste. Boatman told a funny tale but I felt like I read it before. As someone who went to Catholic school for 12 years and got dragged to church every Sunday morning for a couple decades, I've read a lot of religious-themed, gods in the modern world fiction, and I've also read a lot of humorous fantasy, and I didn't feel like this was breaking any new ground. Parts of it were really Neil Gaiman-ish, other parts Christopher Moore, and there was a dash of Lord of Light lurking in there.

Last God Standing was a funny read but I can't give it more than a 3. If I hadn't read so many similar books in the past, I'd probably give it a four, though.