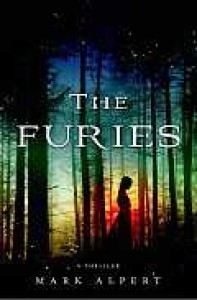 When John Rogers meets a pretty girl in a bar, he has no idea what he's getting into, a clan war between two factions of mutant humans called Furies. Can John and Ariel escape the clan on their trail?

This book was mostly a thriller with some urban fantasy and sf sprinkled around the edges. I like the idea of a secret, long-lived race living among us composed mostly of hot redheads that need an outsider's seed... Wait, what was I talking about again?

Right. For a book that mentions a race burned as witches in the past, there's not a hell of a lot distinguishing this from your paint by numbers thriller in the first 40% of the book, complete with specific models of firearms and the instalove/forced hookup. It almost reads like someone dusted off a thriller novel they had in a trunk and said "You know, urban fantasy is very popular these days..." Arthur C. Clarke's quote about sufficiently advanced science being indistinguishable from magic at the beginning is very apt and pretty much sets the tone for the rest of the book.

Gripes aside, it is an engaging read, though. Lots of twists and turns, shooting, running, etc. The Fury society seemed fairly well thought out. It was interesting to read about a society where women have most of the power and all the men are infertile. I have to mention that there are a few infodumps about genetics, though, and I did find some characters' motivations questionable given the Fury society.

Once the book hit the 75% mark, the manure hit the windmill and cats and dogs started living together. The Furies had their world turned upside down quite a few times but it was an odd number of times so it was still upside down when the book ended. One thing I loved was that it didn't feel like Alpert was gunning for a sequel or neverending series, a rarity in this day and age.

That's about all I wanted to say. Oh, the one sex scene was surprisingly dirty. I think I covered everything now.

The final grade is going to have to be a 3. I wasn't cuckoo for cocoa puffs over it but I liked it more than I was indifferent toward it. It wasn't awesome but I didn't dislike it. Isn't that what the three stars are for?