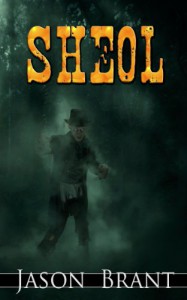 An army of moaners a thousand strong converges on Sheol and Karen is the only one who can stop them. Too bad she's standing on a gallows and the last time she saw McCall, the moaners were upon him...

Sheol brings the West of Hell trilogy to a conclusion. Loose ends are tied up and the end was part awesome, part WTF? I half-suspected what was coming but it was still a surprise.

The amazing thing about the West of Hell trilogy is how far Karen and McCall end up from where they started, both location-wise and as characters. The murderous outlaw and the feisty prostitute go through one hell of a journey, pun intended.

As with the earlier volumes, the gore level is high. Moaners and regular people alike get shot, stabbed, and torn apart with frightening regularity. If possible, Sheol had even more tense moments than the previous two volumes. When an undead army is heading for your town, you can only gun down so many of them.

I can't stress enough how this series should be held up as an example of self publishing done right. It's tightly edited, well-written, and feels like a labor of love.

The West of Hell trilogy now occupies a place of honor high in my Weird Western hierarchy, right up there with the Dark Tower and The Merkabah Rider series. Four out of five stars.