Doctor Who: Salt of the Earth 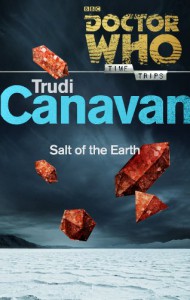 While blokarting on holiday in Australia, The Doctor and Jo Grant run across a bizarre type of salt that turns any life form it touches into a statue made of salt. Can the Doctor figure out what's creating the salt and stop it before he and Jo become the next salt statues? Of course he can! He's the Doctor...

Doctor Who: Salt of the Earth, is the latest of the Time Trips series and the best one yet. It reads like the script of an unproduced half hour episode starring Jon Pertwee.

The Doctor takes Jo on a vacation, intent on bringing her back to UNIT headquarters minutes after they've left. While blokarting (go-karts with sails, used in the Australian salt flats), the encounter some curious salt statues. From there, all the usual Doctory things happen.

The characters rang true to me and the writing was the best I've encountered in a Doctor Who story so far. I loved that one of the POV characters was a cattledog named Smithy. The third Doctor gets down to business in short order and solves the salt problem, as The Doctor is wont to due. I had a feeling I knew what was behind the salt problem but there are only so many ways a Doctor Who episode can go so it wasn't a disappointment.