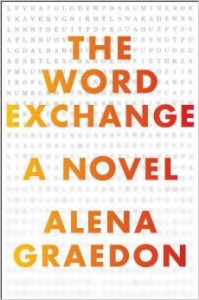 When her father disappears just days before his life's work, the third edition of the North American Dictionary of the English Language, is set to debut, she has no idea of the rabbit hole she'll soon be going down. People are forgetting common words and coming down with what is called the word flu. Is there a connection between the word flu and her missing father?

I got this from Netgalley. My initial impression was that the book was overwritten by someone who was into literary fiction and "slumming it" by writing a sf book and a little too in love with its own cleverness. Did my impression change? Read on...

The Word Exchange is set in a very near future where everyone uses electronic devices called Memes for lots of everyday tasks, like the way people use Smartphones now, only kicked up a few notches. Meme use is so prevalent that people commonly pay a few cents to look up words online. That's fine, until everyone starts speaking gibberish.

First off, I found the worldbuilding a little lazy. Douglas Johnson's age and birthdate didn't gibe with the book's post 2016 time frame. Also, I found it a little too convenient that the only technological advancement was in the Memes. However, I was able to brush that aside. What really irked me early on was that the story was told by two POV characters in the form of journal entries. In and of itself, that's fine. The problem was that both narrators were ramblers so it took forever for anything to actually happen. And the footnotes! Footnotes should only be used in sf/fantasy if your last name starts with a "P" and ends with "ratchett."

Around the 40% mark, I stopped being such a curmudgeon and focused on the story, which had finally begun making some forward progress. The intrusion of nonsense words into Anana and Bart's journal entries was fairly well done and the word flu actually wound up being pretty good, though I liked the way Neal Stephenson did the language virus concept in Snow Crash better.

As people lose their ability to communicate and later access the Internet, society quickly slides downhill, illustrating how dependent everyone has become on electronic devices.

So here we are at the end and I'm not really sure how I felt about this book. I thought parts of it were good but I wouldn't precisely say I liked it. It felt about 100 pages too long. It was a mystery/conspiracy novel that featured sf concepts I thought were done better in other books. I'm giving it a 3 but I'm not really thrilled about it.