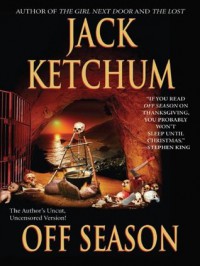 An editor goes to a remote cabin in Maine to get away from things and work on editing her latest assignment. When her boyfriend and a group of friends arrive, they think they're going to have a relaxing week. Instead, they get a night of hell!

As part of my continuing education in horror, I decided to give Jack Ketchum a chance. Off Season was one of the works suggested to me by the crew.

Off Season is a tale of feral cannibals setting upon a cabin full of city folk in the Maine woods. That's pretty much the entire plot. It's a combination of survival horror and gore horror, particular emphasis on the gore.

This is one brutal book, as is expected when cannibal feral hillbillies are on the prowl. Shocking, bloody as hell, and not for the squeamish. Seriously. If you're inclined to squeam at all, you'll be squeaming all over the place. People getting gutted and eaten, raped, chewed up, you name it. Have I yet conveyed how much revolting stuff happens?

At the end, I wouldn't say I liked it but it was powerful and engaging. Ketchum doesn't just cross the line, he covers it with blood and intestines and drags it for a couple miles through the woods. Three out of five stars. I'm willing to read another Ketchum book but it'll be a while.