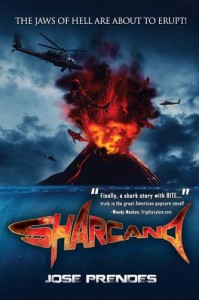 I eyed this up on Netgalley for a couple weeks before finally pulling the trigger on it. It looks like a B-movie in book form. What could be wrong with that? I'll get back to that in a minute.

Sharcano is way better than it has any right to be. It reads like one of Christopher Moore's Pine Cove books, only on a global scale. Instead of a B-movie in book form, it's more like a parody/homage of big budget disaster movies. It could easily have been a Michael Bay movie with an all Aerosmith soundtrack.

Sharcano packs a lot into its pages: philandering newscasters, hot lady scientists, sinister Asian scientists, redneck Bigfoot hunters, Area 51, volcanoes, disease, and sharks made out of lava. It's a buffet of carnage up in this bitch.

Like I said earlier, the writing was way better than I thought it would be. I actually cared about the characters, something I did not anticipate. It's loaded with funny similes and quotable dialogue, which contributes to the length. And therein lies the rub.

For what it is, Sharcano is about twice as long as it needs to be, especially since it's the first book in a trilogy. When you watch a B-movie or cheesy disaster flick, it's only two hours out of your life. This cheesefest is over 420 pages and it's not as fast of a read as you'd think. Ultimately, it feels like a spectacular 100 page novella crammed into a 420 page book, to paraphrase the mighty Ebert.

Still, it's pretty fun. I was entertained by the concept of lava sharks but it had all worn a little thin by the end. Imagine the feeling you'd get after watching three disaster movies in row.

Three out of five stars. I doubt I'll be returning for the next installment, though.