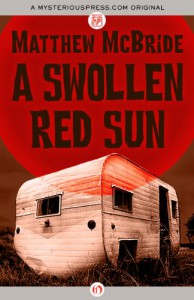 When Deputy Sheriff Dale Banks finds $52,000 hidden in a catbox, he does the wrong thing for the right reasons. The missing money touches off a blaze of meth, murder, and mayhem!

If there is a golden rule in crime fiction, it's that if you find a hidden pile of money, do not take it or the shit will hit the fan! In this case, the shit is a group of lowlife meth heads and the fan is Deputy Sheriff Dale Banks.

A Swollen Red Sun takes place in Gasconade County, Missouri, one of the Midwest's meth hotbeds. Banks soon finds himself up against meth heads (and dealers) like Jerry Dean Skaggs, Jackson Brandt, and the inbred preacher The Reverend, as well as a dirty cop pulling the strings.

Matthew McBride paints a bleak picture of rural Missouri, reminiscent of books like No Country for Old Men, Knockemstiff, and Winter's Bone. The locations in the book are both hellish and all too realistic. However, the world he create isn't without hope. Bo Hastings is dying to clear the Hastings name. Banks wants to be a family man first and a lawman second. Olen just misses his wife and kids and his only companion is his dog.

The book had quite a few twists, some quite surprising. By the time I hit the 75% mark, I couldn't put it down and had no idea who the survivors would be by the end.

Kids, don't do meth! Four out of five stars.