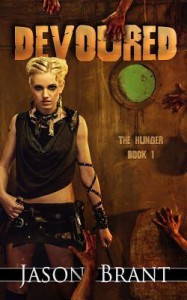 After yet another unsuccessful job interview, Lance York shoves a strangely-acting woman out of the path of a speeding car and is struck himself. When he awakes in the hospital, he is shocked to find a plague has struck Pittsburgh, a plague that mutates its victims and turns them into eyeless, savage, flesh-eating horrors! Even with help from some new friends, can Lance escape the abattoir Pittsburgh has become?

After reading his West of Hell trilogy, Jason Brant invited me to give his Hunger series a shot. It took me a while to take the bait but Brant soon had me hooked once again.

Before even opening the book, or whatever the equivalent of opening an e-book is, I kept thinking "Zombies? Aren't we all getting tired of that shit?" Brant puts his spin on the survival horror tale and I Devoured it in two sittings. Besides, his plague victims aren't zombies. They have some virus that makes their eyes fall out and their brain functions go haywire, mutating them into cannibal feral things with fangs and caveman brows.

The protagonist of the tale, Lance York, was a guy I could really get behind. He wasn't a hyper-prepared militant or a survivalist super hero. He's kind of a screw up, he's going through a divorce, and is unemployed. Oh, and he's also infertile. Lance spends the first part of the book escaping the hospital and dealing with his soon to be ex-wife and her boyfriend.

The book kicks into high gear once Lance finally escapes the hospital, deals with militants, and hooks up with Cassandra, an ax-wielding failed artist. The scope ratchets up with every revelation. By the time Lance gets his legs under him, it's pretty apparent that civilization is going down the toilet pretty quickly.

The gore and carnage are the stars of the show here and they spend a lot of time on stage. The Vladdies, as Cassandra calls them, are pretty terrifying. However, the militia assholes were much bigger villains considering they're human and the Vladdies are practically forces of nature.

While this is the first book in a trilogy, it's pretty satisfying on its own with no cliffhanger ending or anything else that might leave a reader feeling cheated.

I can't find anything bad to say about this book. Like Edward Lorn, Jason Brant is self-publishing done right. Four out of five stars.