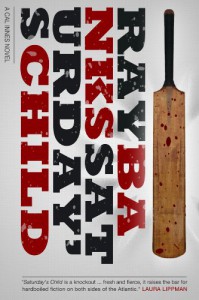 When a mobster hires unlicensed PI Cal Innes to find a dealer (casino, not drug) that took off with his money, Innes quickly finds himself in over his head. Further complicating things are Mo Tiernan, the mobster's psychotic son, who thinks he should have been given the assignment. And why is the elder Tiernan really so keen on getting his hands on the dealer?

This book fell into my lap for two reasons: 1) None other than Johnny Shaw vouched for it and 2) It was free on the Kindle. Fortunately, it was one of those freebies that I would have gladly spent money on.

Saturday's Child is like a movie Jason Statham would have been in before he starting exclusively making shitty action movies. The lead, Callum Innes, is a damaged goods drunk detective in the mold of George Pelecanos' Nick Stefanos or Lawrence Block's Matthew Scudder.

The case looks simple a the outset but quickly proves to be much more complex. Turns out Rob Stokes took a lot more from Morris Tiernan. Further complicating things is the younger Tiernan, Mo, a drugged out psychopath. It's all Cal can do to keep from getting killed in a whirlwind of booze and violence.

The setting, Manchester and Newcastle, set it apart from a lot of other crime books, though I could see all the British slang and dialect turning off some readers. Like the aforementioned Nick Stefanos, the case is almost secondary with the problems and history of Cal Innes taking center stage. Cal pretty much makes the dog's breakfast of the case and takes several beatings. The hard violence is tempered with Cal's black brand of humor, making for quite an enjoyable read.

That's about all I have to say. If you're into English gangsters, this is the book for you. And it's free. Four out of five stars.