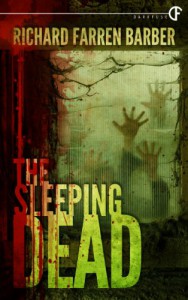 All Jackson Smith wants to do is go to a job interview.  When a suicide disrupts traffic, Jack hoofs it and finds that's just the tip of the iceberg.  Why are people all over the city killing themselves?  And can Jack keep himself from being next?

"The suicide plague hits" would be a good way to sum up this novella.  People all over town are gripped by suicidal thoughts and are offing themselves in various horrible ways.  Jackson's struggle to find his girlfriend and not become one of the massed victims is palpable and very well done.  The Sleeping Dead of the title are even creepier than the actual suicides.

The way Richard Farren Barber depicts the suicidal thoughts invading Jack's mind was chilling and all too believable.  I liked the way Jackson and Susan banded together without falling repeatedly on one another's genitals.

My only real gripe with the book was with the ending but that was a matter of personal taste.  The DarkFuse Novella series continues to impress.  3.5 out of 5 stars.