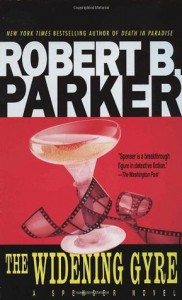 When a state representative is getting blackmailed with a film of his wife having sex with another man, he hires Spenser to get to the bottom of things for him. But when Spenser learns the man's identity, he's bitten off more than he can chew, especially with him preoccupied with Susan Silverman being out of town.

I was needing a quick read before taking on another fantasy read and The Widening Gyre fit the bill. It got the job done.

The book started slow, with Spenser moping because Susan Silverman was out of town. Even when Susan's not around, she manages to suck the life out of things. Anyway, Spenser gets on a security detail for a state representative with an alcoholic wife and things spin out from there.

Spenser did some great detective work when he wasn't pining for Susan in this one, gradually piecing together the identity of the blackmailer and then stirring up a hornet's nest when he finds out who the man's father is. There isn't a whole lot of action in this one but when it comes, Parker makes it count.

So yeah, I only gave this a three despite enjoying the shit out of parts of it. Firstly, there was very little Hawk. Secondly, there was way too much of Spenser and Susan discussing their relationship when they finally crossed paths again halfway through the book. Are there people out there who actually enjoy Susan Silverman having such a large role in the books?

Despite the abundance of Susan and lack of Hawk, I still enjoyed this book for the most part. 3.5 out of 5.