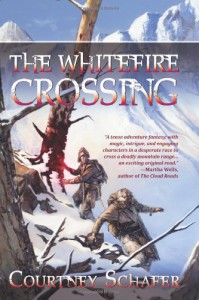 A smuggler named Dev is hired to escort a young man from Ninavel to Alathia, taking him through the treacherous Whitefire Mountains.  But when the young man turns out to be an apprentice Blood Mage with an angry master on his backtrail, Dev gets a lot more than he bargained for...

I had this on my radar for about a year.  When the ebook went on sale for $1.99, I knew the time was right.

The Whitefire Crossing is a refreshing change of pace from most fantasy novels on the racks.  Gone is the pseudo-medieval Europe setting and generic quest story.  The setting of The Whitefire Crossing reminds me much more of the American West.  Ninavel is an analog to Las Vegas, with it's dependence on Mages for water and its lawlessness.  The Whitefire mountains are a stand-in for the Rockies and the protected border of Alathia could easy represent the US-Mexican border.

Dev, smuggler with a heart of gold, reminds me of a mountain-climbing Han Solo, in it for the money but also having a kind streak.  Kyran, apprentice Blood Mage, is a pretty believable pissed off young man wanting to escape his master's hold on him.

The magic system was pretty interesting.  I like the idea of kids born with magical talents, The Taint, and losing them once they hit puberty.  Dev's origins did a lot to explain why he was who he was.  Ruslan was a pretty vile villain and Blood Mage reminds me of the dark side of the Force quite a bit.

The Whitefire Mountains setting did a lot to separate this one from the rest of the fantasy herd.  I saw on Courtney Schafer's bio that she's into mountain climbing and her love of it shows through in the descriptions of mountain terrain, flora and fauna.

I liked the book quite a bit but it wasn't without its flaws.  For one thing, the story took a nosedive for me at the 60% mark, once they left the Whitefire Mountains behind.  A new threat was introduced and the story lost some of its luster.  That's about my only complaint, though.

The Whitefire Crossing is the first book in a series but it stands pretty well on its own and was well worth the $1.99 price tag I paid for it.  Four out of five stars.