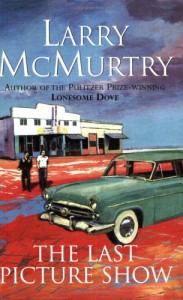 Sonny, Duane, and Jacy come of age in a dusty Texas town. What will happen to them once they graduate high school?

I snagged this for the princely sum of $1.99 on the Kindle. It was worth every penny.

As I said in the teaser, The Last Picture Show is a coming of age tale, a tale of what happens to people as they get older and drift apart. While I never read it before, it fit like a favorite t-shirt.

Larry McMurty paints a vivid picture of small town life as Sonny and the rest graduate high school and struggle to find their places in the world. Duane wants to marry Jacy. Jacy wants to do something that will get the town talking. And Sonny wants Duane's girl. Nothing really goes the way anyone planned. Just like real life.

I thought the three main characters were very realistic depictions of teenagers, not just some middle age guy's faded memories of what high school was like, and likeable, despite their character flaws. Sonny, in particular, was kind of a walking train wreck but I wound up caring about him anyway. By the end of the book, I was feeling almost as lonesome as he was. While all of the characters did some questionable things, everything rang true.

McMurtry's writing has the same bullshitting on the front porch feel Joe Lansdale's does and I have to think he was an influence on Lansdale on some level. The Last Picture Show feels a lot like the coming of age stories Lansdale has been writing the last twenty years or so, only with less cursing.

There were tons of quotable lines. All three main characters said stupid things that were a lot like things I would have said back in the day.

If you're looking for a book about friendship, love, finding your place in the world, and a bunch of high school seniors trying to have drunken sex with a heifer, look no farther. 4.5 out of 5 stars.