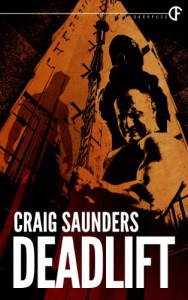 When David Lowe thought his wife was cheating on him, he hired a man to kill her. Now, he's holding an elevator cable and is the only one who can save her life. That is, if the man in the mask doesn't kill him first...

This is the first book in my Kindle Unlimited Experiment. For the 30 day trial, I'm only reading books that are part of the program and keeping track what the total cost of the books would have been.

Deadlift is a tale of iron will, of passion, and of not quitting once the shit hits the fan. And there's a lot of shit hitting this particular fan.

David Lowe is a hulking brute of a bodybuilder. His wife is everything and when he thinks she's been cheating on him, he snaps, hiring a bombmaker to killer her. It's unfortunate that it was all a big mistake and David has to do what he can to save her life. Too bad there's a serial killer and a gun thug also in the mix.

The story of a guy holding a severed elevator cable with his wife in the elevator doesn't seem like it should be that long but Craig Saunders uses flashbacks and viewpoint changes to make it go the distance without seeming stretched. Even though Lowe did something terrible to kick things off, he's still a sympathetic figure and goes through hell for most of the story, getting shot, stabbed, blown up, and falling quite a ways. Tension is high for most of the tale and it was almost a relief when it was over.

The addition of the man in the mask was questionable at first but turned out to be what pushed the book from a 3 to a 4 for me. Like holding up an entire elevator wasn't a challenge enough for David.

The DarkFuse novella series continues to be my go-to source for horror fiction. Four out of five stars.