Claire DeWitt and the City of the Dead 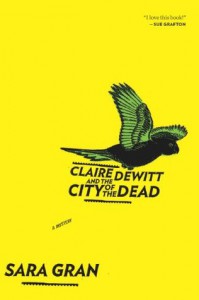 When prosecutor Vic Willing goes missing in post-Katrina New Orleans, Claire DeWitt comes to town to find out who killed him.  Can she put her personal demons aside long enough to find out?

This is the sixth book in my Kindle Unlimited Experiment. For the 30 day trial, I'm only reading books that are part of the program and keeping track what the total cost of the books would have been.

This is one of those books that's going to be really hard to do justice to in a review.

Claire DeWitt is the greatest detective in the world and a very unconventional one.  Her bible is a book called Detection by renowned French detective Jacques Silette, a confusing and contradictory philosophical tome that is either a work of genius or utter insanity.

If George Pelecanos' Nick Stefanos learned his methods from Douglas Adams' Dirk Gently and was female, the result would be a lot like Claire.  Rather than relying on conventional methods, Claire supplements them with intuition, dreams, the I-Ching, and a cocktail of alcohol and mind-expanding drugs.  City of the Dead reads like a vision quest at times.

The combination of philosophy and the wreckage of post-Katrina New Orleans do a lot to raise this above a lot of similar detective fiction involving missing persons.  The setting is a character unto itself.

Claire's background is explored in dreams and flashbacks, revealing how she became the world's greatest detective, starting with solving mysteries with her two friends when she was just a teenager, having found Detection in a forgotten dumbwaiter in her parent's dilapidated mansion.  Lots of dark things are only hinted but you get the feeling Claire has been to hell and back several times.

The case was suitably serpentine and while I had an idea what happened to Vic Willing, I was in the dark about the particulars for most of the book, which I love in a mystery.  The whole thing reminded me of Twin Peaks a bit in its strangeness.

I've made the book sound really dark but it's not.  Claire's sense of humor keeps the book from descending too far into the darkness despite the horrors she uncovers.

Claire DeWitt and the City of the Dead is one of the best books I've read all year.  Five out of five stars.