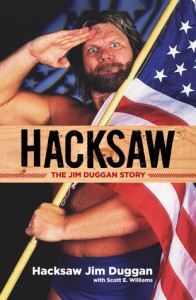 Hacksaw is the biography of pro wrestler Hacksaw Jim Duggan.

This is the sixteenth book in my Kindle Unlimited Experiment. For the 30 day trial, I'm only reading books that are part of the program and keeping track what the total cost of the books would have been.

I first became a wrestling fan when I was around 7 years old, about the same time Moses led the Hebrews out of Egypt, right around the time Hulkamania exploded on America and changed the wrestling business forever. As I got older, I became a workrate snob decades before I ever heard the term, gravitating toward Ricky Steamboat, The British Bulldogs, and similar wrestlers. However, I always had a soft spot for a crosseyed brawler named Hacksaw Jim Duggan.

First off, this book was way better than I thought it would be. I can usually gauge how much I'm going to enjoy a wrestling book by how much of the book is devoted to a guy's pre-wrestling life. Duggan was in the ring before the 10% mark, after stints in the NFL and CFL.

Unlike a lot of wrestling books, Duggan doesn't portray himself as one of the all time greats. In fact, he's not afraid to tell stories that make him look like a dumb ass. He also talks about how important his family is to him without preaching about it.

This book is a little thin but packed with road stories, of adventures on the road while working Mid-South with Terry Gordy, Ted DiBiase, Steve Williams, and the Junkyard Dog. He talks about the incident when he got caught driving drunk and stoned with the Iron Sheik, whom he was feuding with at the time, as well as a fight on an airplane with Koko B. Ware. Like most wrestlers, he mentions his respect for Harley Race.

His time in the WWF during the boom is a little glossed over and he doesn't rehash what we've all heard before about WCW, although he talks about the Bruise Cruise, which I vaguely remember from commercials but never saw written about before.

The WWE bringing him back for one last run gets a fair amount of time, as does working the independents and getting inducted in the hall of fame. Like all wrestling books, I would have read more road stories but I didn't really have any complaints about this book.

3.5 out of 5 stars. What do you think about that, tough guy? Hooooooooooooo!