The Cheat Code for God Mode 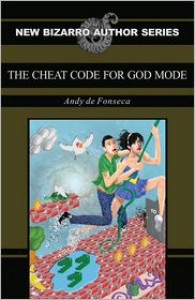 When Margy and Victor find a rare video game, Adamina, for an obsolete system in a pawn shop, little do they know the havoc they are about to unleash, for Adamina holds the key to the universe...

The New Bizarro Author series has been a favorite of mine for the last few years. Alas, I've let myself fall a bit behind.

Imagine playing Grand Theft Auto and being horrified when you find out that you're actually controlling someone in the real world and doing horrible things. That's kind of what The Cheat Code for God Mode is like.

Cheat Code reads like a mix between Snow Crash, Ready Player One, PKD, and every obnoxious internet meme you can think of. Margy and Victor inhabit a city on one of Jupiter's moons, a city with humanoid bulls acting as cops, animal people, portals, and flying turtles, a world where everyone is connected to the Infranet. When they find Adamina and activate it, all hell breaks loose.

The book explores questions about identity, even as Margy and Victor are confronted with dancing babies and rabbits with pancakes on their heads.

The Cheat Code for God Mode would be a good intro to Bizarro fiction, especially for video game and pop culture enthusiasts. While it's weird, it's weird in the vein of the Twilight Zone, not in the vein of talking penises running for president or people having sex with furniture. Four out of five stars.